I always get excited when I see kids at an improv show, because for kids, improv is a magical feat. Human beings creating entire stories out of thin air without plans or safety nets where anything can happen is an act of daring unlike any other. Adults… well we’re dead inside and the magic often dries up a bit after one too many cringe-worthy bar basement improv shows, but kids aren’t allowed in bars, so they don’t know yet!

So you can imagine my excitement when I walked into The Sense-ations! created by IRTE (The Improvisational Repertory Theatre Ensemble) and found the first three rows of the theatre at The Producer’s Club packed with excited talkative young kids. That’s when I knew this was going to be a very exciting–and very different–kind of improv show. 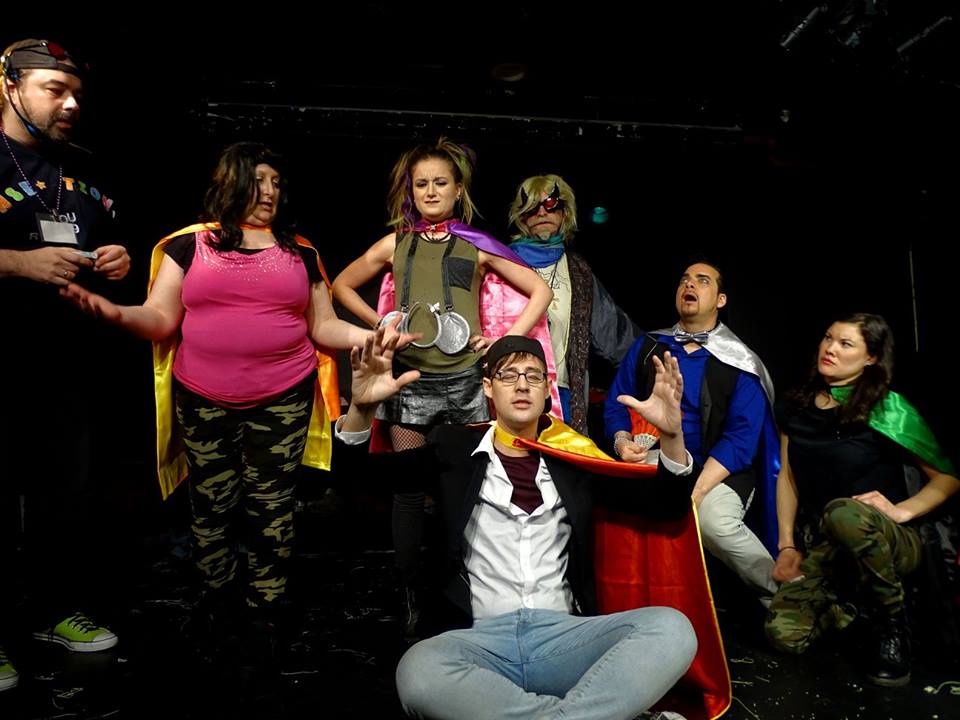 Although The Sense-ations! is an improvised show some things are consistent throughout the performances. The story always follows a pop-group / superhero team called The Sense-ations who are attacked by a supervillain or supervillains. The Sense-ations have to work together to overcome the villain and keep making their rockin’ music. Exactly what form the supervillain and their scheme takes as well as what happens to our heros and how they win the day is different every night.
If you see The Sense-ations! you’re in for a wild night. The back of the stage is made up of tables that are piled high with props of every kind you could need. Wigs and capes and ties and horns and goggles and tarps and tons of silly-string (I believe that theatre trope is referred to as Chekhov’s Silly-String). And although the cast was far from using every prop it looked like there was a prop for every situation and I always laughed at the clever devices they came up with (special shout out to the cherry red tie that “taste” was using as a super powered tongue, by far my favorite).

Improv in general lives and dies by the talent of their improvisors though. So, how do The Sense-ations! stack up in this regard? You’ll be pleased to hear very well. The whole ensemble does a great job sharing the space and accepting each other’s ideas. I never felt one person was controlling or manipulating the whole show. It’s little things like this that take a good improv show and make it great seeing the actors switch back and forth between two simultaneous scenes or watching the whole group use object work to silently build a scene on stage. Your individual mileage may vary (it is improv after all) but I am very confident you’re in for a good time with The Sense-ations!
In the tradition of variety shows like Saturday Night Live the show also features a section with a  special musical guest. The night I saw the show featured Eli Bridges, but the run also includes performances from ReW STaRR, Craig Greenberg, and Carla Ulbrich as well. This was one of my favorite parts of the whole night (surprisingly) but only because watching 30 5th graders wave their cell phones over their head to a folk singer in a small theatre is a truly unforgettable experience.

All in all The Sense-ations! is a wonderful night of theatre, comedy, and improv. Hats off to The Improvisational Repertory Theatre Ensemble as well as the wonderful cast for creating something I loved. It isn’t the next great drama, but it doesn’t claim to be, what it claims to be is silly and fun. And if that’s what you need in your life, you couldn’t do much better than this.
IRTE continues with a send up of B Movie Sci-Fi in THE EXPERIMENT at the Producers Club. http://www.irteinfo.com/schedule
Conor Mullen is artistic director of the Shakespeare-based improv troupe, AS YOU WILL, currently performing at The P.I.T. in NYC.
http://www.shakespeareimprov.com