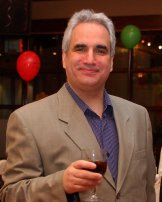 ROBERT LIEBOWITZ HAS BEEN SEEING AND WRITING PLAYS FOR MORE THAN 40 YEARS, HE ALSO HAS A MATHEMATICIAN’S HEAD FOR DATES. IN PART II OF HIS TOME (Read part I in SHOWTONES) HE SHARES HOW ONE “MARQUIS TOOK DOWN ALL MARQUEES.

As the year 1980 progressed into the actual 1980s, all still seemed fine on the theatrical front–theater activity was in full swing; it was everywhere, it seemed. Productions on Theater Row were at 100% capacity.. The Public Theater, led by the ubiquitous Joseph Papp, was firing on all cylinders, making stars of Meryl Streep and Kevin Kline. ‘Sweeney Todd’, Sondheim’s master ode and nod to all things opera, had just completed its run at the gigantic, 1900-seat Uris Theater. Classes for either Phil Black Dance Studios or HB Acting Studios were both a requisite and a rite of passage; you were not really in the theater if you were not studying at least at one or the other or both. Where else can you study acting with Bill Hickey for $6 a lesson? Nowhere.

Visits to the old Drama Book Store, on West 52nd Street, were pilgrimages to the New World…or, more accurately, Theater World. The store seemed always packed, filled with theatricians of all shapes and sizes. The lone bulletin board, located right outside the mini-elevator you needed to ride in order to reach the store, was overflowing with advertisements for answering services (remember them?), acting classes, and photographic services for the required picture/resume. The floor was an ocean of books, scripts, and issues of the Tulane Drama Review; no one ever came and went in 10 minutes. It was the place where one spent the brunt of the day, the fat part of the bat.

Outside the store, the different ‘levels’ of theater production–Broadway, off-Broadway, and off-off Broadway (they really did exist)–each had successfully secured its own domain. The highlight of this time was the  volcano blasts from two entries–the first, ‘Torch Song Trilogy’, by Harvey Fierstein, a stunningly beautiful theatrical experience; and ‘Nicholas Nickleby, a seven-hour extravaganza based on the Dickens’ novel, and making Roger Rees a household name. In fact, many theatricians from all the continents in Theater World wore little buttons on their lapels, bags, etc–‘Got Torched? Get Nicked!’, read the very clever tag line. Like the date-book, it became a must-have accessory for aspiring theater-doers.

The Village Voice had–hard to believe now, since the paper itself no longer exists–several theater columnists, all pounding away at the electrified theater movement happening right before their eyes. This included Gordon Rogoff, a weekly contributor, whom I studied with as an undergraduate in his Theater History class at Brooklyn College (my almost alma-mater). He was living, breathing history, regaling the class with tales of the Blacklist of the 1950s, when he attended Yale; specifically, how the entire campus reacted with shocked silence when one of its alumni (forgotten now) had given names at the HUAC.

Alas, Mt Rushmore had begun to show its age, and began to crumble under the usual wear and tear. Those three aforementioned giants (Miller, Albee, Williams) were, indeed, past their prime; they would never again write anything that would compare to their glory years. Williams, in particular, seemed to write the same play for the last 20 years of his life…a truly tortured soul, he died in an unbelievable, almost unmentionable, tragic accident in 1983. Neither Albee nor Miller fared any better. Still, there were willing and able replacements ready to step into the shoes–David Mamet, already a household name from ‘American Buffalo’, had now burst on the scene once more, with his rousing, blistering concerto, ‘Glengarry Glen Ross’. Opening night (I was there, a nice perk for dating someone who worked for the Nederlanders); not only was the playwright making his mark, but so were a host of actors (like Joe Mantegna), who soon after became household names in television and the movies. Not to mention Steppenwolf, the company in Chicago who had originally produced the play, as it was now being imported to New York.

And then it happened.

Five theaters, including the quaint Helen Hayes, were literally on the receiving end of a wrecking ball, in order to make way for the Marriot Marquis Hotel. It sent shock waves through the campus, and all theatrical circles; 165 people were arrested at the protest. In true dramatic style, all the theatricians who were gathered there–including Crystal  Field, Founder of Theater for the New City.–sang the ‘Star Spangled Banner’ when the ball made its presence known.

[The aforementioned Joseph Papp chained himself to the object of the wrecking ball asking them to tear him down instead – ed.]

The Murder of Broadway now had a suspect…but it wasn’t the only one. There were others who, it would soon be discovered, were involved; notably, a gigantic ‘M’ had suddenly invaded our living rooms. More on that, when Dateline continues…