Late Night with EV and Puppets 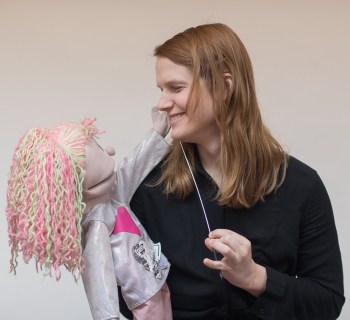 The art of puppetry has been around for centuries.  It spans all civilizations and cultures.  Puppetry has a wide appeal for children and adults alike.  The brilliance of the beloved Muppets is that they can elicit innocent laughter in giddy children while simultaneously providing subversive humor to a more adult audience.  Puppets come in infinite combinations of forms.  They can be as simple as sticking your hand into a garden variety foot sock or they can be carved out of the finest wood with elaborate gears and mechanisms.  I even created a puppet of my very own in a cool place called The Puppet Kitchen.  Her name is Glamadora.  She’s purple and she’s fabulous!  EV’s puppets were colorful and ornately decorated hand puppets consisting of an acerbic mermaid named Janee, an adorable cuddly bird named Egg and a narcissistic little girl named Illyana.  Janee and Illyana had awesome heads of flowing wavy hair.

Upon arriving at the theatre, we were given a ticket that welcomed us and thanked us for being a part of a late-night talk show audience.  When the house opened, EV was on stage preparing and juggling.  She greeted everyone as they came in and introduced herself if she didn’t know them.  When the show began, the fourth wall was immediately broken.  EV came out into the audience and encouraged everyone to say hello to each other.  She got back on stage and stated that every talk show has a theme and the theme of this one was going to be dreams.  It was about the kind of dreams we have in our sleep as opposed to personal aspirations.  EV spoke about her personal experiences with dreams and then said that she selected three dreams to highlight and talk about for the show.  This is where the puppets came into play.  Each puppet was utilized to be characters from the dreams and to interact with EV as she shared the dreams.  As dreams tend to be, EV’s dreams were streams of consciousness in shifting landscapes with some sauciness thrown in for good measure.  It is very interesting how in a dream, you can have a totally different relationship with someone than you do in real life just like in EV’s dreams where her close friends didn’t recognize her.  There was an audience participation portion of the show in which audience members were encouraged to write down a particularly memorable dream they had.  EV collected and shared some of them with the audience while commenting on them.  The show ended without really ending.  EV stated that, she didn’t like endings and that she was just going to sit on stage as different colored lights flashed.  She finally exited the stage but not before inviting the entire audience to a nearby diner.

The show had a very loose format except during the descriptions of the three dreams.  That part was structured.  While the dreams were certainly interesting and lengthy enough to stand alone without any props, the puppets made the dream telling even more interesting and endearing.   EV came across as slightly unsure of herself yet friendly, open and likeable.  Sometimes when puppets are utilized, they tend to upstage the individual breathing life into them.  In this show, everyone was on a level playing field.  The lighting was well crafted.  Overall, the show was cute and pleasant.  Sweet dreams EV.  Next time I’ll see you at the diner.